The Great Seal is the official seal of the British Monarch, attached to documents and official correspondence as a means of validation. The Great Seal came in to use in England and Scotland in the eleventh century, and in Wales during the twelfth century, with Edward the Confessor (1042-1066) being the first British King known to have employed a seal for this use. The double-sided design adopted by Edward has remained largely unchanged and is still used today, on one side showing the monarch seated in ‘majesty’ and on the other, the monarch on horseback.
Only one Great Seal was used at any one time, but it was quite common for monarchs to have more than one Great Seal during their reign. This could be for a variety of reasons: marriage, new title or change of title, or simply wear and tear of the seal matrix (the engraved or embossed tool used to press the design in to wax). When a new Great Seal was adopted, the old matrix would be destroyed.

Elizabeth I’s second Great Seal was designed by Nicholas Hilliard, the celebrated miniaturist, in 1584, and came in to use in 1586. The legend around the outside of the seal reads ELIZABETHA DEI GRACIA ANGLIE FRANCIE ET HIBERNIE REGINA FIDEI DEFENSOR (Elizabeth, by the Grace of God, Queen of England, France, and Ireland).
Seals were of particular interest to antiquaries because of their usefulness in dating documents, as well as being a rich and fascinating source for understanding contemporary fashions, artistic trends ideals and interests. Today, the Society has one of the most important and extensive collections of seal casts, impressions, and matrices. The cast of the seal of Henry de Lacy, for example, strongly resembles that of one drawn by J. M. W. Turner and can be seen in the bottom corner of some drawings. 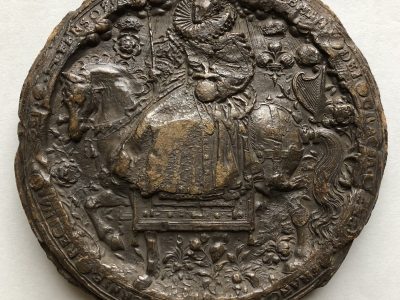 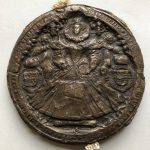