Edward IV (1442–83; reigned 1461–70 and 1471–83) became king aged 18, after Henry VI. This is one of the earliest and finest portraits of Edward IV to survive, very likely painted from a prototype made during the king’s lifetime. Although Kerrich acquired this portrait and its companion, Richard III (arched) from two different sources, dendrochronological analysis has shown that they are painted on panels from the same tree and are likely to have been produced in the same workshop. It is not a contemporary likeness although its lost prototype probably was. Edward’s small black cap and splendid gown of black cloth of gold, with its fur lining and hanging sleeves, are very similar in style to those in the companion portrait of his brother, Richard III (arched). 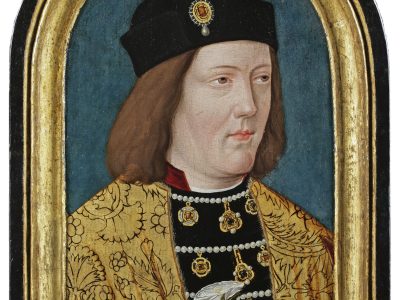