Drawing of the Ribchester Helmet

This is a drawing of one of the finest examples of a cavalry parade helmet from Roman Britain. The helmet was discovered accidentally in 1796 by the son of a clog-maker playing in some wasteland in Lancashire. The helmet and much of the hoard found alongside it was purchased by Charles Townley FSA in 1797 and later acquired by the British Museum. When comparing this drawing to the real helmet the achievement of the artist is clear: the fine decorative detail has been minutely recorded, as well as the nature of the corrosion of the helmet ‘as found.’ 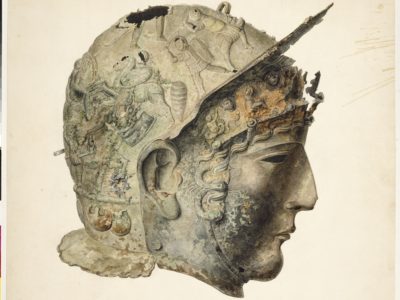