This image is part of a detailed account of King Edward VI’s procession from the Tower of London to the Palace of Westminster on the day before his coronation. Unique to this painting is its recording of the City, especially Cheapside with its goldsmiths’ shops. Originally this image was a mural in Sir Anthony Browne’s Cowdray House. Incidentally the Society commissioned the only record of it from Samuel Hieronymous Grimm in 1785 before the murals at Cowdray House were destroyed by a fire in 1793.

See The Encampment of the British Forces near Portsmouth, 1545 for another copy of a Cowdray House wall painting. 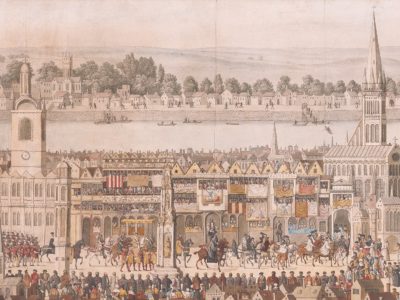