The artist of this painting was probably also responsible for the portraits of Engelbert II and Philip of Cleves. This is probably a portrait of Christian II (1481–1559), who reigned as King of Denmark and Norway from 1513 until 1523 and of Sweden from 1520 until 1521. Christian was deposed by his opponents in 1521 and was replaced by his uncle, Frederick I (1471–1533). The King is portrayed as a young man, perhaps in his early twenties. His long pale face, seen in three-quarter profile, is silhouetted by its frame of wavy, shoulder length hair. He has dark and rather penetrating, heavy lidded eyes, a prominent nose and a pursed, thin-lipped mouth. Beneath his large chin is a curious ruff-like beard, possibly concealing a goitre on his neck. 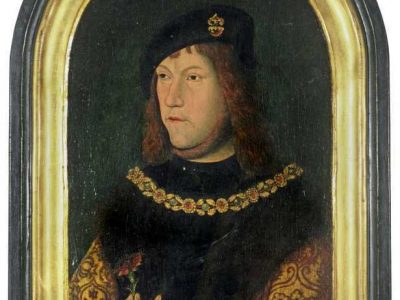