Child with a Rattle

Until the early twentieth century boys were not dressed in trousers until the age of four, but from the stance of the child with its feet firmly planted astride this child is thought to be a boy. Judging from his elaborate and costly gown, the child was probably a member of the aristocracy, perhaps of royalty. Portraits of very young royal and noble children at this period frequently include a plaything, often a rattle of some kind. Artists also commonly portrayed children holding a bird. 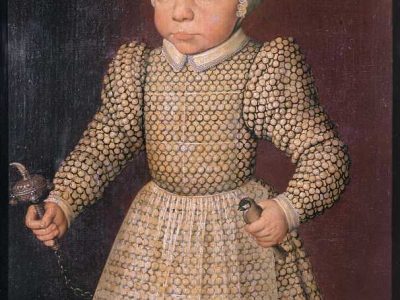