Charlemagne, also known as Charles the Great was King of the Franks from 768, King of Italy from 774, and from 800 the first emperor in Western Europe since the collapse of the Western Roman Empire three centuries earlier. The expanded Frankish state he founded is called the Carolingian Empire and he did much to define the shape and character of medieval Europe

The model used for this historical portrait, created some seven centuries after the emperor’s death, is not, however, universally thought to represent Charlemagne. As with the Society’s portrait of Louis XII, a better example survives in a rectangular frame in another collection, in this case, on a panel in Vienna. Recent research suggests that this portrait may be of Charles IV of Luxembourg (1355-78) whose portrait in the National Gallery of Prague resembles the figure depicted here. 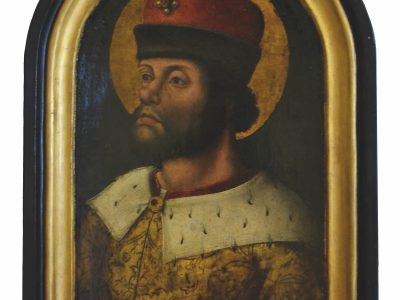