In 1816 the Society’s historical draughtsman Charles Stothard was commissioned to copy the entire Bayeux Tapestry. The drawings from his initial visit to France were engraved by James Basire. Stothard took these engravings with him on a later visit to Bayeux and hand-coloured them on site from the original work. These were published in Vetusta Monumenta between 1821 and 1823 – the first time that a complete colour reproduction of the tapestry had been made available to the public. Stothard’s work is also significant because it is the first record of the Bayeux Tapestry after it was damaged during the French Revolution and before repairs were carried out in the 19th century. By working with clues from surviving threads and colours he recreates sections of missing embroidery and reveals scenes lost through damage. The Society holds both the original coloured engravings and the published plates. 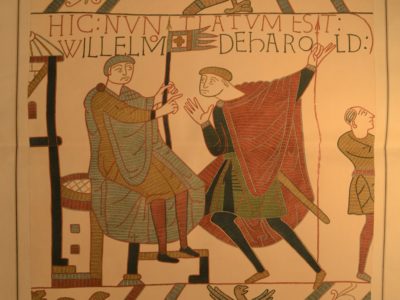 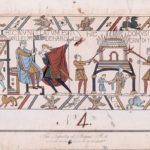 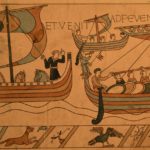