This rare example of a hearth-blower was found during the digging of the Basingstoke Canal and presented to the Society in 1799. When it was filled with water and heated, steam came from the mouth of the figure. Objects such as this are examples of the Society’s collection during the late-eighteenth to early-nineteenth century: at this time, the necessity for a more official recording of the various antiquities brought to meetings became apparent, leading to the appointment of a formal draughtsman. This made the Society responsible for bringing to public attention some of the most outstanding archaeological discoveries of the age through the drawings being circulated in Archaeologica and Vetusta Monumenta. This contributed to the exponentially growing interest in antiquities and founding of archaeological societies across Britain. 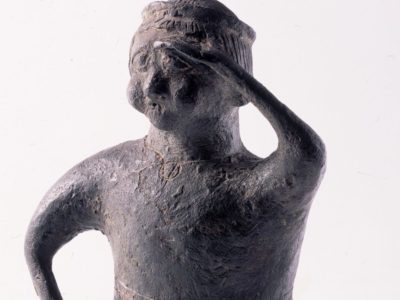