You are here:  Home / Fakes, forgeries, and the Society of Antiquaries: Part 1 Shadwell forgeries

Fakes, forgeries, and the Society of Antiquaries: Part 1 Shadwell forgeries

This series of blogs by Becky Loughead, Librarian, ties in with our new exhibition in the Library at Burlington House, which examines several forgeries connected to the Society and its collections.

“There is scarcely an object in the range of ancient or medieval art to which the attention of the forger has not been given”, lamented Director A. W. Franks FSA at a meeting of December 1858, exhibiting counterfeit specimens for examination by the Society. Before modern advances in archaeological dating techniques, the production and circulation of fake antiquities posed a widespread

threat to the collectors’ market, and to academic study. If even the most learned scholars could be fooled by a forgery, how could a budding amateur antiquary be sure a convincing-looking antiquity was the real deal? The result was, Franks continued, “the detriment of archaeological science, and the discouragement of many from pursuing the study of antiquities.” [1]

But this was nothing new for the Society. From its foundation in the early-18th century, leading antiquaries including William Stukeley FSA were convinced of the authenticity of fake documents and objects. Papers on such artefacts were presented to the Society at meetings; drawings were commissioned; books and engravings were published and circulated. Each referencing, recopying and reprinting, therefore, meant the historical record became more and more distorted. In some instances, all sight had been lost of the ‘original’ source, and no serious enquiry was (or could be) made into verifying its existence, or its provenance. You are likely familiar with the saying “absence of evidence is not evidence of absence” – in many cases, it just had to be taken on good faith that antiquities (often detached from their original context) were just that – authentic remains of the past.

Our Library display looks at historical forgeries that each have their own fascinating stories to tell. Many forged objects were made purely for financial gain, capitalising on the contemporary fashion for collecting antique curiosities. Others were targeted pranks to expose the gullibility of antiquarian ‘experts’. Some were made by well-educated creators who sought recognition and renown in the leading scholarly circles of the day (including to become elected Fellows of the Society of Antiquaries!). A few hoaxes were so elaborate and skilfully-concocted, their legitimacy outlasted the lifespan of their original creators – sometimes for decades, or even centuries. We may still even be living with their legacies today.

In this blog, we take a look at the Victorian ‘Billy and Charley’ forgeries…

‘Billy and Charleys’ (also known as the Shadwell forgeries) 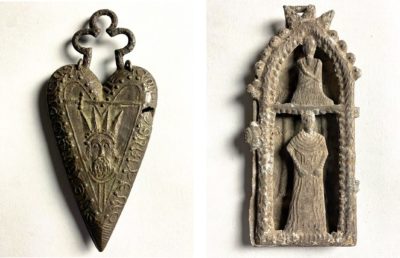 Examples of Billy and Charleys from the Society’s Museum collection [LDSAL564.5; LDSAL564.4]

“…we may look forward to a time when forgeries properly attributed will possess an interest hardly inferior to authentic objects” – Presidential address by Harold Arthur Lee-Dillon FSA, Anniversary Meeting 1903.[2]

In the mid-19th century, two enterprising illiterate mudlarkers, William Smith (Billy) and Charles Eaton (Charley), began forging ‘medieval’ lead objects and selling them to unsuspecting antiques dealers. The pair are estimated to have produced c.5000-10,000 items, including pilgrim badges, medallions, coins, statuettes, and spearheads – all claimed to be found during the building of a new dock at Shadwell.

The counterfeits were purchased from the dealers both by private collectors and buyers on behalf of museums. Eventually the sheer quantity of these lead objects for sale on the antiques market arose suspicion, but even a court case in 1858 couldn’t prove they were forgeries, or that Billy and Charley were behind them! Some leading antiquaries of the day, including FSAs Charles Roach Smith and Frederick William Fairholt, testified to the historicity of the artefacts at the trial. 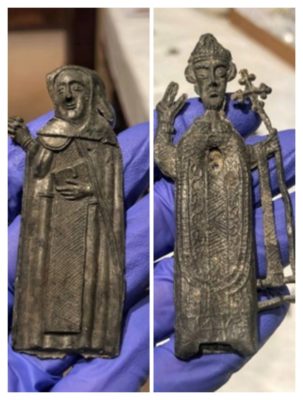 However, scepticism in some quarters continued, not least as the objects were inscribed with meaningless jumbles of letters and symbols (as, of course, Billy and Charley were illiterate). The pair also used Arabic numerals for dates rather than Roman, which did not come into use in England until the 15th-century. In fact, the objects were so crude, this argument was actually used in the trial as to their authenticity – surely a modern forger would have done a better job!

Investigations were pursued by the politician, businessman and antiquary Charles Reed FSA. Reed gained the trust of a local sewer scavenger and bribed him to break into Billy and Charley’s workshop, culminating in the theft of some of their lead moulds. In March 1861, Reed exhibited the moulds to the Society as proof the objects were forgeries. [3] 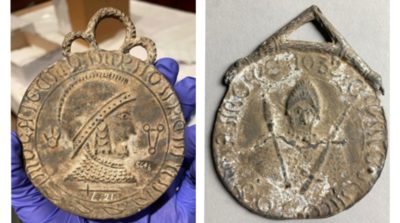 Examples of Billy and Charleys from the Society’s Museum collection [LDSAL564.6; LDSAL564.3]

Although the pair had been exposed and their market greatly limited, Billy and Charley continued to make counterfeit objects until Charley’s death in 1870. The forgeries continued to circulate, and many museums across the country have Billy and Charleys in their collection. They have since become desirable folk art collectors’ items and often sell for more than the genuine medieval objects they imitate – a sure sign of their enduring success.